Chief Instructor of the European Tang Soo Do Federation 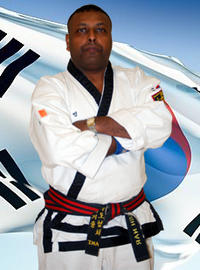 Master Nar is of small frame, but solid, and it is his size, or lack of it, that has fueled his indomitable spirit as a martial artist. In his own words, he was considered 'weedy' when, as a thirteen year old, he started in Tang Soo Do to boost his confidence.

Tang soo do training was very tough in the 70's, but he was determined to stick to it. So determined, in fact, he saved his school dinner money to pay for the lessons. The determination paid off as Master Nar is now the chief Instructor of Grandmaster Ki Yun Yi's European branch of the International Martial Arts Association and a six time world championship winning coach.

With over thirty one years experience, Master Nar has dedicated his life to Tang Soo Do and developing the IMA Tang Soo Do schools in Europe. He has worked tirelessly to expand the European Tang Soo Do Federation which now has member schools in Malta, Wales, England and Ireland.

In 2001 Grandmaster Ki Yun Yi pronounced Master Nar as the IMA's instructor of the year. Master Nar has hosted two world IMA Tang Soo Do championships and has been nominated to host the 7th IMA World Championships in Ireland in 2010.

In April of this year he hosted the 2nd European championships, the first time a Tang Soo Do event of this kind was held in Ireland. He has personally taught six students from white belt to master belt level. He has no plans of slowing down.

When asked what motivates him his answer is simple, "I get my drive and enthusiasm from my Kwan Jang Nim, Grandmaster Ki Yun Yi."

Master Nar regularly travels to Malta to attend gradings and give seminars. He is paramount to our success and we are very grateful for his continued support and commitment.

Find Master Nar on Facebook by clicking this image.

Master Nar In Action
Master Suresh Nar is 6th Dan Tang Soo Do Master, Chief instructor of the European Tang Soo Do Federation and an exemplary martial artist. He he demonstrates both his powerful technique and his finesse when performing hyungs.