Malta IMA Tang Soo Do 몰타당수도
The M.T.S.D.A respects the original term, Tang Soo Do, and intends to preserve its heritage and value as a traditional way or path.

“The more understanding you have about Karate, the less you need to change or modify it.”
News

"He who fears he will suffer, already suffers because he fears" 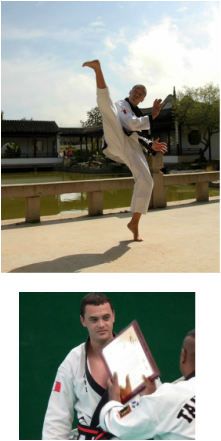 Master Wallace began his Tang Soo Do training in 1994 in London, England. He states, "I started training in Tang Soo Do because self-defence was a must growing up where I was from. From my first lesson I felt that family feeling that martial arts in general seems to cultivate. My instructor at that time was Master Paul McManus who truly understood me as a young adolescent who needed guidance in life. I grew with Tang Soo Do and Tang Soo Do grew on me and I learned valuable lessons in life through the efforts of Master McManus and Master Suresh Nar. I found the means to steer my life on a successful path."

In 1999, Master Wallace was promoted to the rank of 1st Dan by his current Instructor Master Nar. With a wish to spread the Art, he took Tang Soo Do to the island of Malta in 2000 where he became the first and only Instructor to teach it there.

On June 25th, 2010 after many hard Masters' training camps, Master Wallace was awarded his 4th Dan. His belt was presented in the ritual way by Kwan Jang Nim Ki Yun Yi, founder of the International Martial Arts Association.

Master Wallace's thoughts are "We are given choices every day without fail. It's what decided that makes the outcome a good experience or a bad one, but to have perseverance from a negative outcome builds a positive lesson if you are willing to see it. All lessons in life are valuable. I believe that our aim as Instructors is to help shape the lives of others mentally and physically. Our teachings will help turn negative situations into more positive ones, keeping the mind on a successful life. Only with commitment and true integrity can we feel the true meaning of brotherhood among ourselves. Every major choice I have made has been positively influenced by Tang Soo Do. That is why it's my way of life."

Master Wallace brought Tang Soo Do to Malta in 2000 and opened the Young Gi 용기 Academy. He has since then worked tirelessly to promote the art, develop his students and for the success of Malta IMA Tang Soo Do.

Tang Soo Do - one style, one goal. Success through commitment.